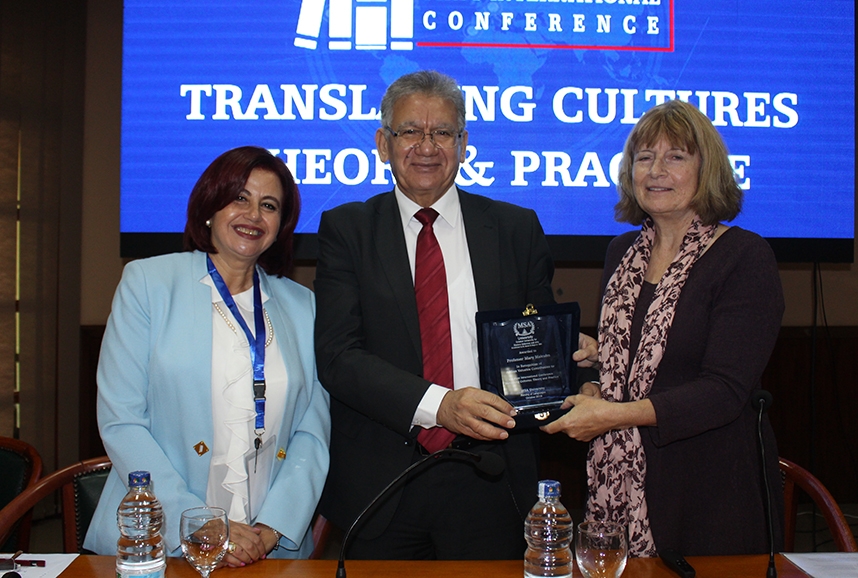 The Faculty of Languages -MSA University- celebrated the success of its First International Conference "Translating Cultures – Theory & Practice". The conference was held on Oct 9-10, 2019 under the auspices of Professor Nawal El Degwi, the Head of the Board of Trustees, and Professor Khayri Abdel Hamid, the University President and chaired by Prof. Soha Raafat, Dean of the Faculty of Languages.

The theme of the conference is quite relevant to fundamental global aspects and is considered one of the main current challenges in Egypt and worldwide because of the diversity and fragmentation that characterize the world in the 21st century. At present, translation and cultural studies play vital roles in interpretation, transformation and sharing knowledge about values, beliefs, histories and narratives of the self and the other. These roles could bridge gaps between cultures and bring people from different parts of the world together.

The conference as thus reflects Egypt's vision of 2030 in opening up to different cultures to achieve cultural development and build bridges of communication with countries all over the world.. It aimed to highlight the role of cultures and/or cultures in translation in transmitting diverse values, narratives and histories; concepts that lead to appreciation, tolerance, acceptance and inter/cross-cultural communication.

Over the two days, the conference offered an engaging platform for sharing ideas about research topics across disciplines, boundaries and cultures, and for investigating how theories and practices stimulate new approaches and perspectives. The conference hosted scholars specializing in translation, linguistics, literature, and cultural studies. It explored the state of the art visions in the field of humanities in order to promote awareness of contexts, practices, materials and technologies that are of importance when transnationalism and globalized connections are inevitable.

The conference was a huge success with the attendance of more than 250 participants representing a large number of distinguished professors and researchers from International, Arab and Egyptian universities, as well as a huge number of MSA students from the Faculty of Languages and other faculties. Professor Mary Malcolm, the Vice-Chancellor of the University of Bedfordshire, UK, was the keynote speaker on the first day of the conference with an intriguing session entitled " Last in Translation: The Promise and Practice of a Research-Teaching Nexus". Dr. Omid Tofighian, an award-winning lecturer, researcher, and community advocate was the keynote speaker on the second day of the conference. His illuminating talk was entitled "Refugee Filmmaking and the Border-Industrial Complex ".

The topics discussed during the conference' sessions discussed a number of important issue including: Translation of Cultures, Identity and Multiculturalism, Digital Humanities, Eco-culture, Gender Culture, Folk Culture, Intercultural Insights, Media Culture, Education and Culture, Stylistics, Psychology, Moral and Social Responsibility in the Practice of Translation, Identity and Feminism in Translation, and Children's Literature.

The last session of the conference witnessed an exceptional cultural event, "Explore Egypt", which provided the attendees with a magnificent virtual tour to Egypt's great monuments and tourist attractions. The closing session was concluded with the celebration of honoring the organizing committee who contributed to the success of the organization of such a successful conference.